Ever left your house thinking your face looks flawless, only to step outside and find that you’ve got streaks of foundation on your jawline, a little too much blush caked on, or creases in your shimmery eyeshadow? It happens to the best of us. When it comes to makeup application, lighting is key, and sadly, not all of us are blessed with giant windows and natural sunlight beaming into our bedrooms and bathrooms. This is where the lighted makeup mirror comes in, and trust us, ladies—it’s a total game-changer. To help you avoid another makeup mishap like the one mentioned above, we’ve rounded up a list of the best makeup mirrors on the market, from under-$30 options to fancy selections that can also play your favorite tunes and charge your phone (seriously). Keep scrolling to find 10 top-rated makeup mirrors at every price point. A flawless face is just a few clicks away.

BEAUTY GURUS SWEAR BY THESE MIRRORS FOR FLAWLESS MAKEUP APPLICATION 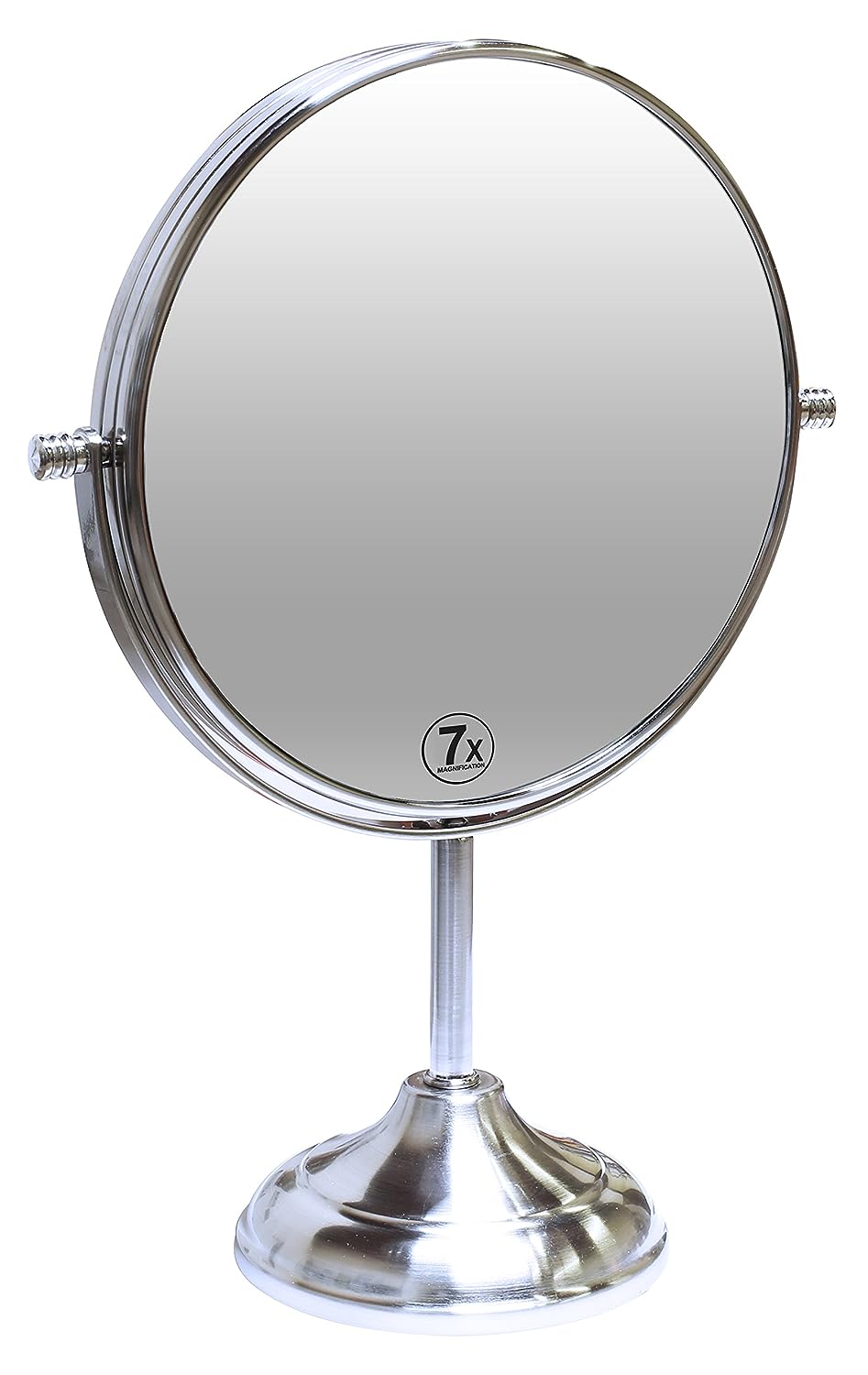 The two-sided DecoBros MM-007-1 (around $20) is an attractive model that conveniently swivels 360 degrees and is equipped with a durable frame that should last for years. It’s stable enough to not tip over easily, and light enough to pick it up when you need to. 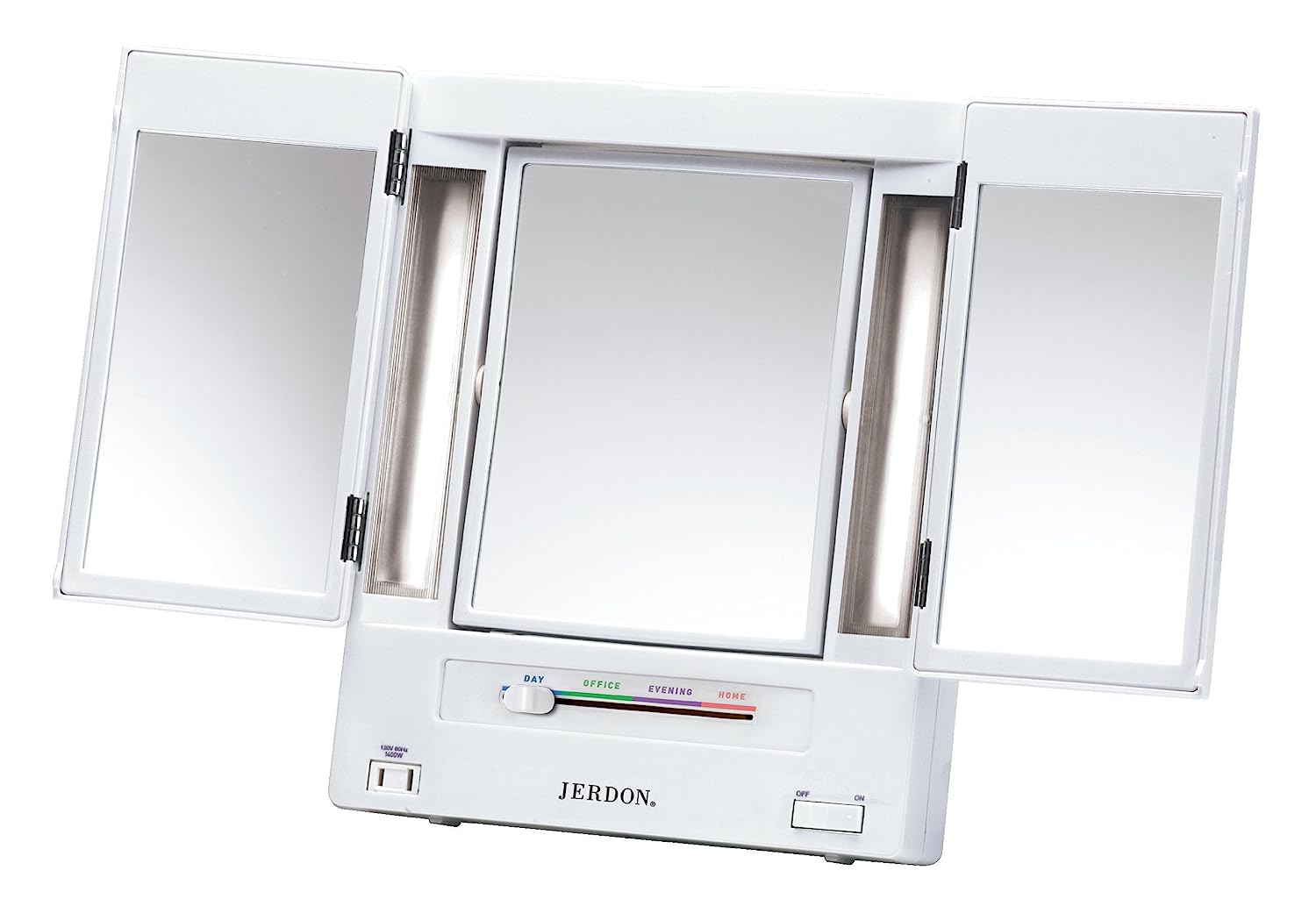 The Jerdon Tri-Fold JGL9W (about $33) provides an expansive view of your face, with its two adjustable side mirrors, center mirror and four light settings. It offers a maximum 5x magnification that makes it easier to apply everything from foundation to eyeliner accurately. 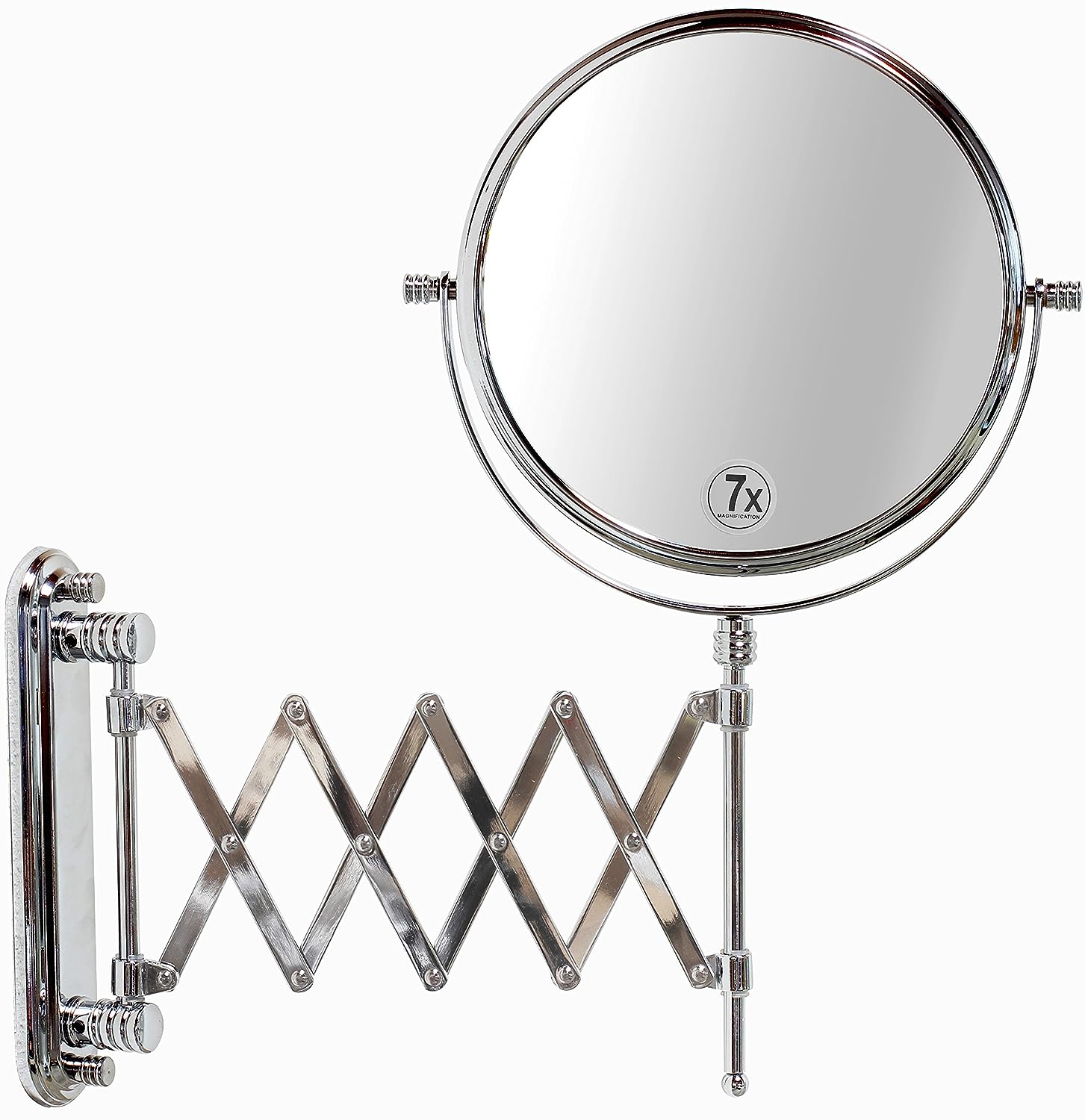 The DecoBros MM-004-1 (appx. $40) is a wall-mounted option that folds away nearly flush, for a clutter-free counter space. It’s a great choice for a small vanity area, where every bit of room counts, or for use when standing at a bathroom sink. 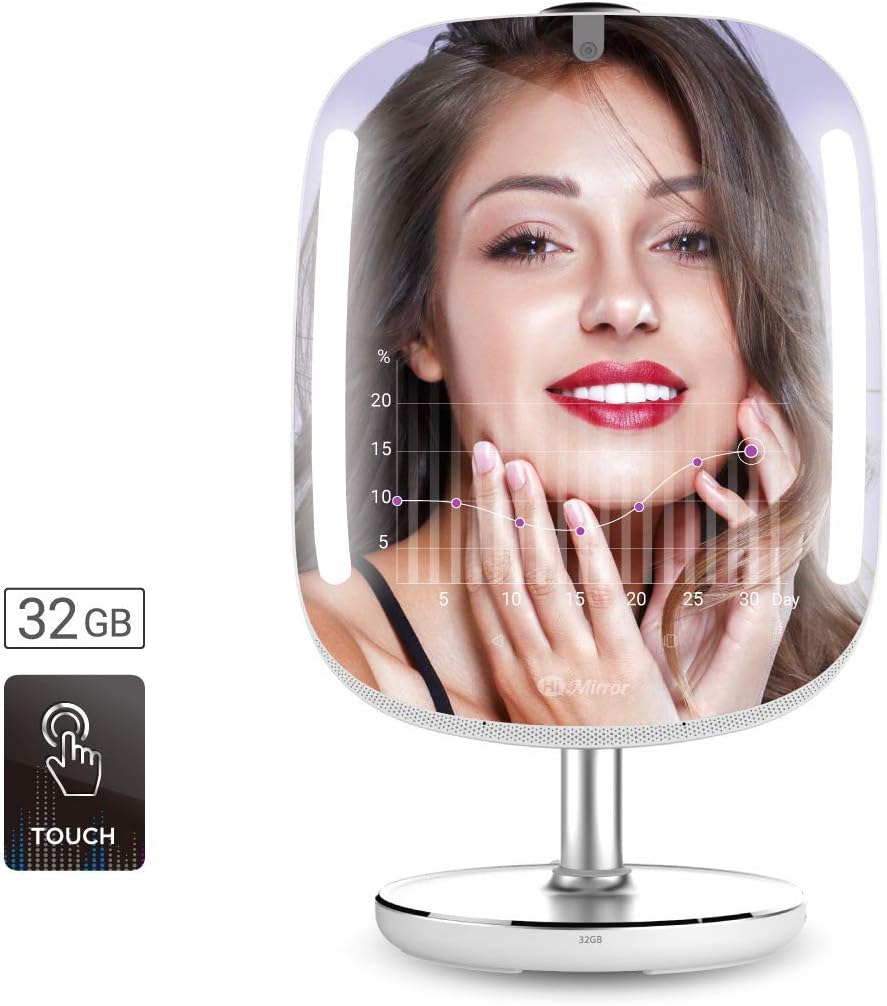 The HiMirror Mini 16G (around $99) is designed to help you assess the type and severity of any skin issues, so you can target them for treatment. It also features augmented reality technology that lets you see how certain looks would suit you before actually applying any makeup. 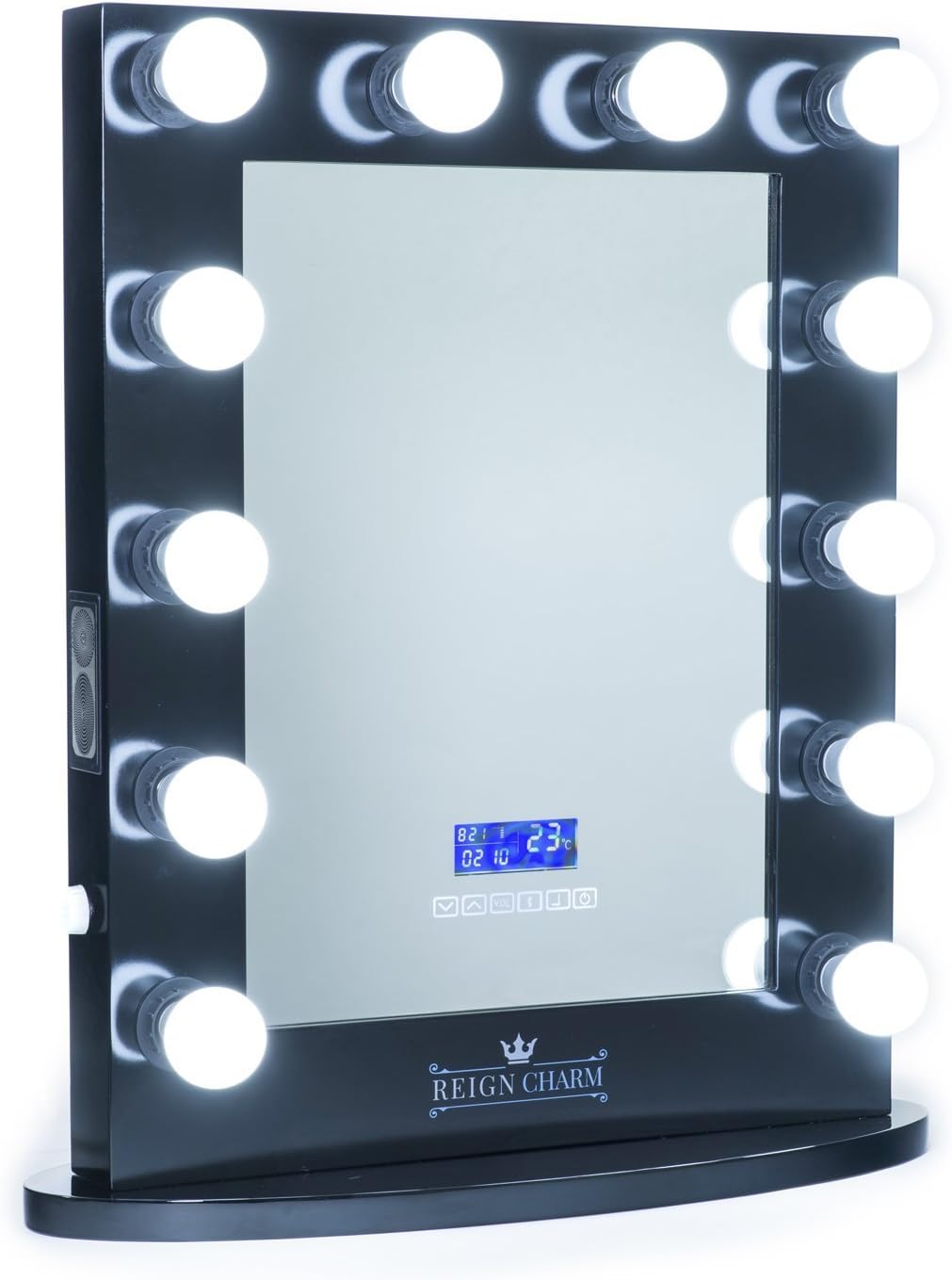 Not only will the bright bulbs surrounding the ReignCharm HM6002 (around $332) help you with your beauty regimen, they’ll also make you feel like a Hollywood star. Though on the pricey side, its generous size and variety of useful features make it worth the money. 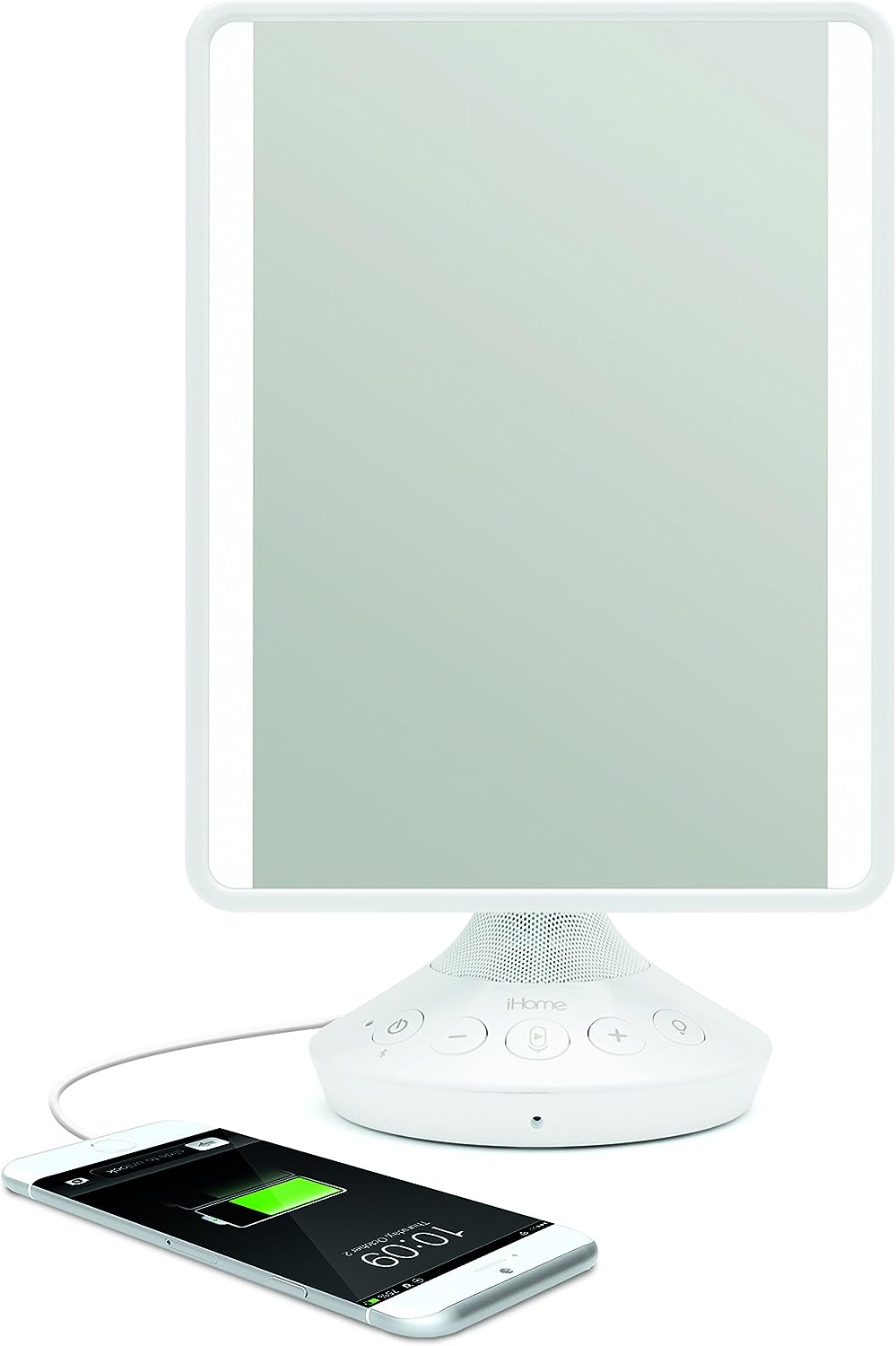 Busy individuals will appreciate the thoughtful features of the iHome iCVBT2 (about $69). With Siri and Google compatibility and hands-free speakerphone capabilities, it allows you to check on important information, like the weather or traffic, while applying blusher. 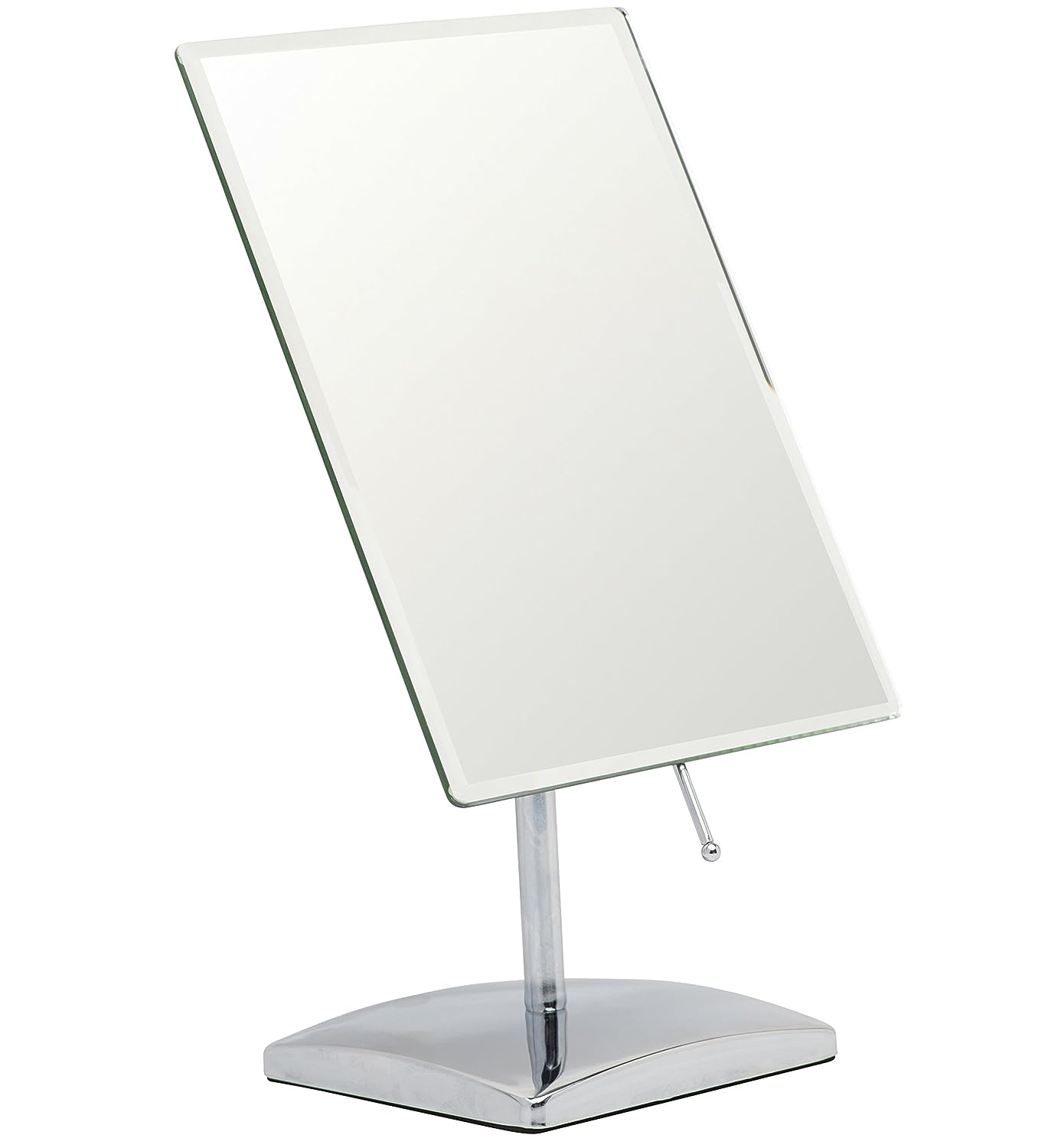 The long reflective surface of the Mirrorvana Frameless (around $25) can be manipulated to almost any angle, for convenience. This is a non-magnifying option, which is ideal for those who prefer to see themselves exactly as others will. 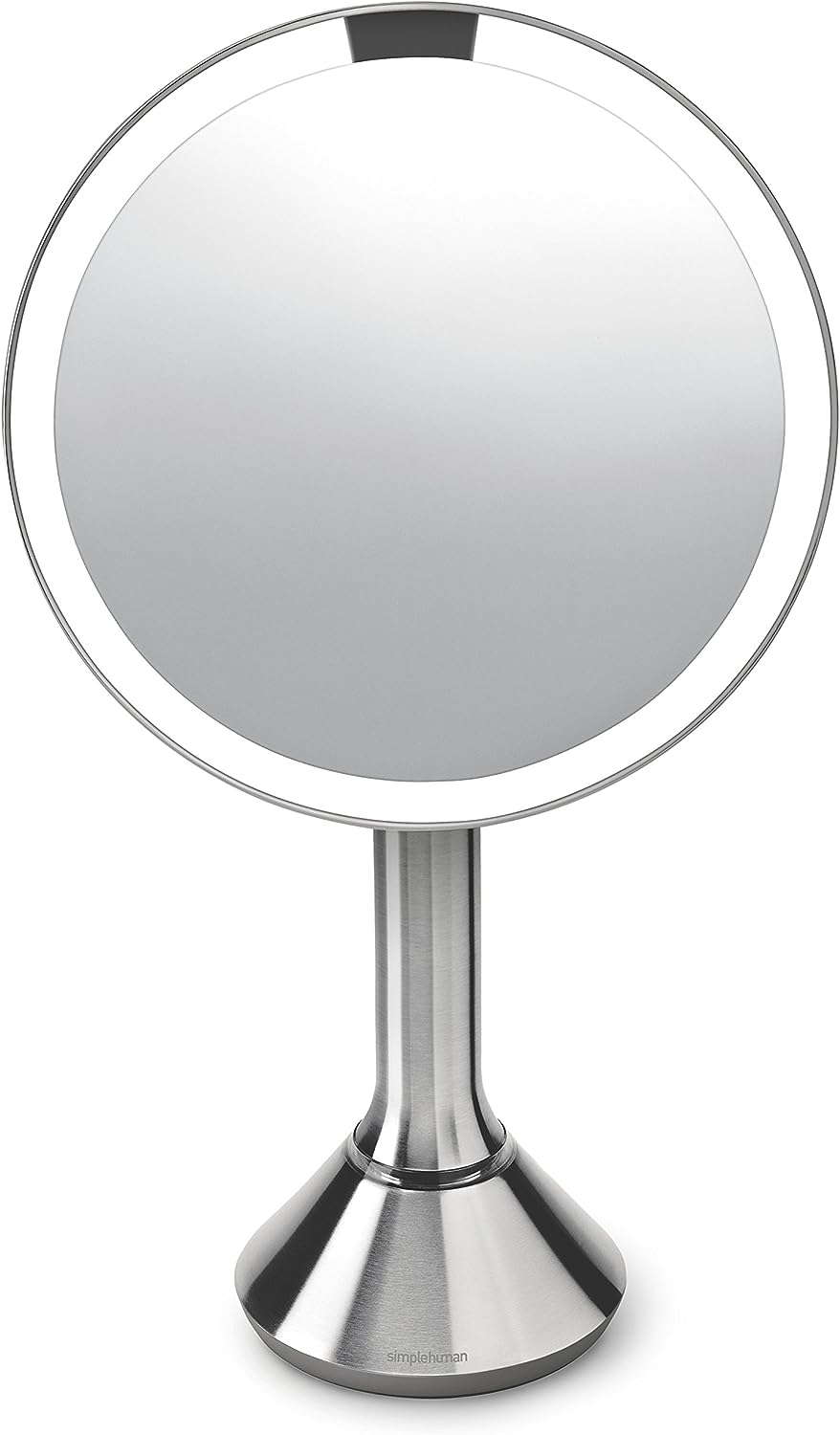 Intuitive and rechargeable,the Simplehuman ST3026 (around $199) turns on automatically as your face approaches, providing a bright and natural-looking light, thanks to its proprietary “Tru-Lux” system. Its surgical-grade LEDs should last a very long time. 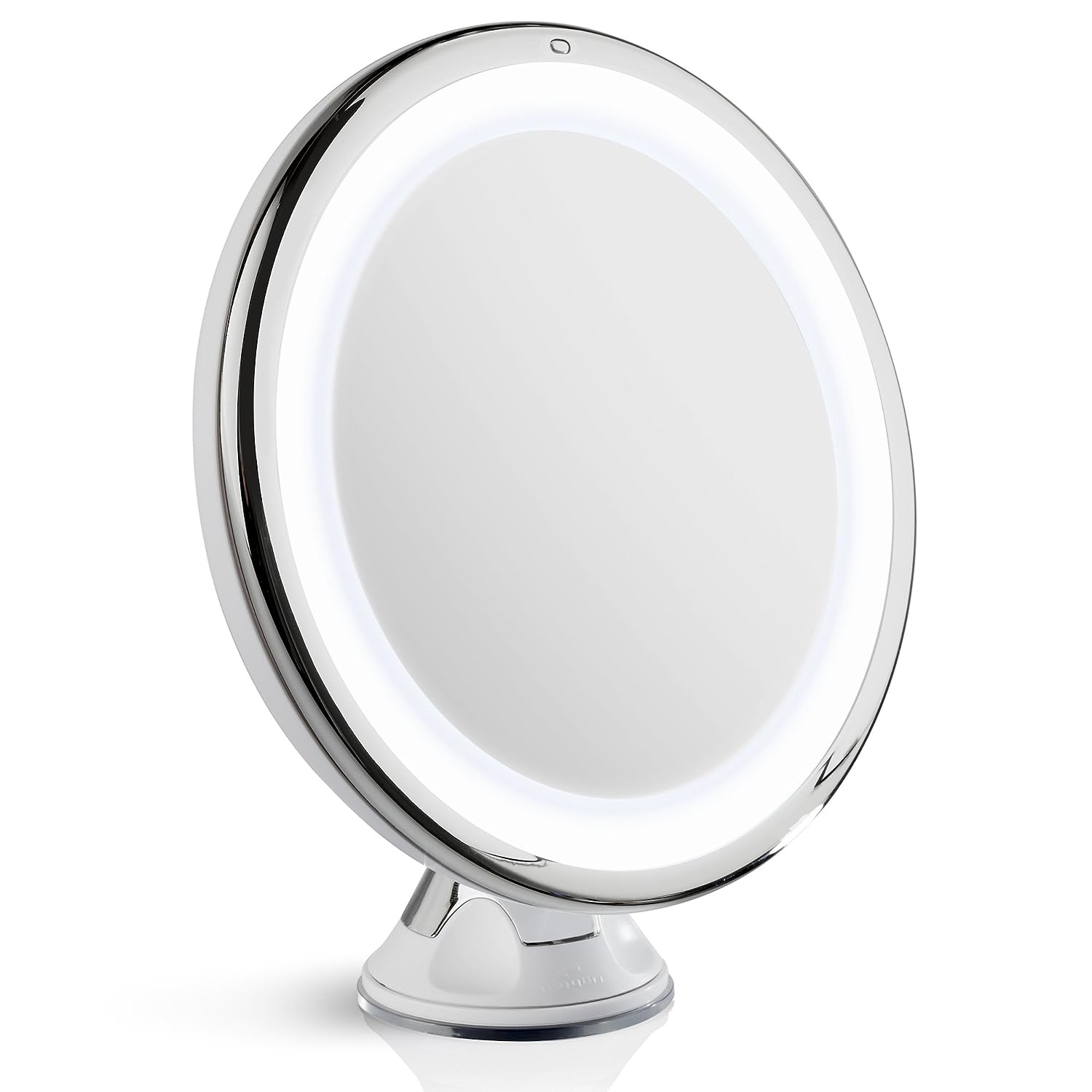 A great choice if you want to be able to use it in different locations periodically, the Fancii Daylight FC-LMMM10X (appx. $27) features a suction cup that can attach to nearly any clean, flat surface, whether that be your bathroom mirror to add magnification or a shower stall. 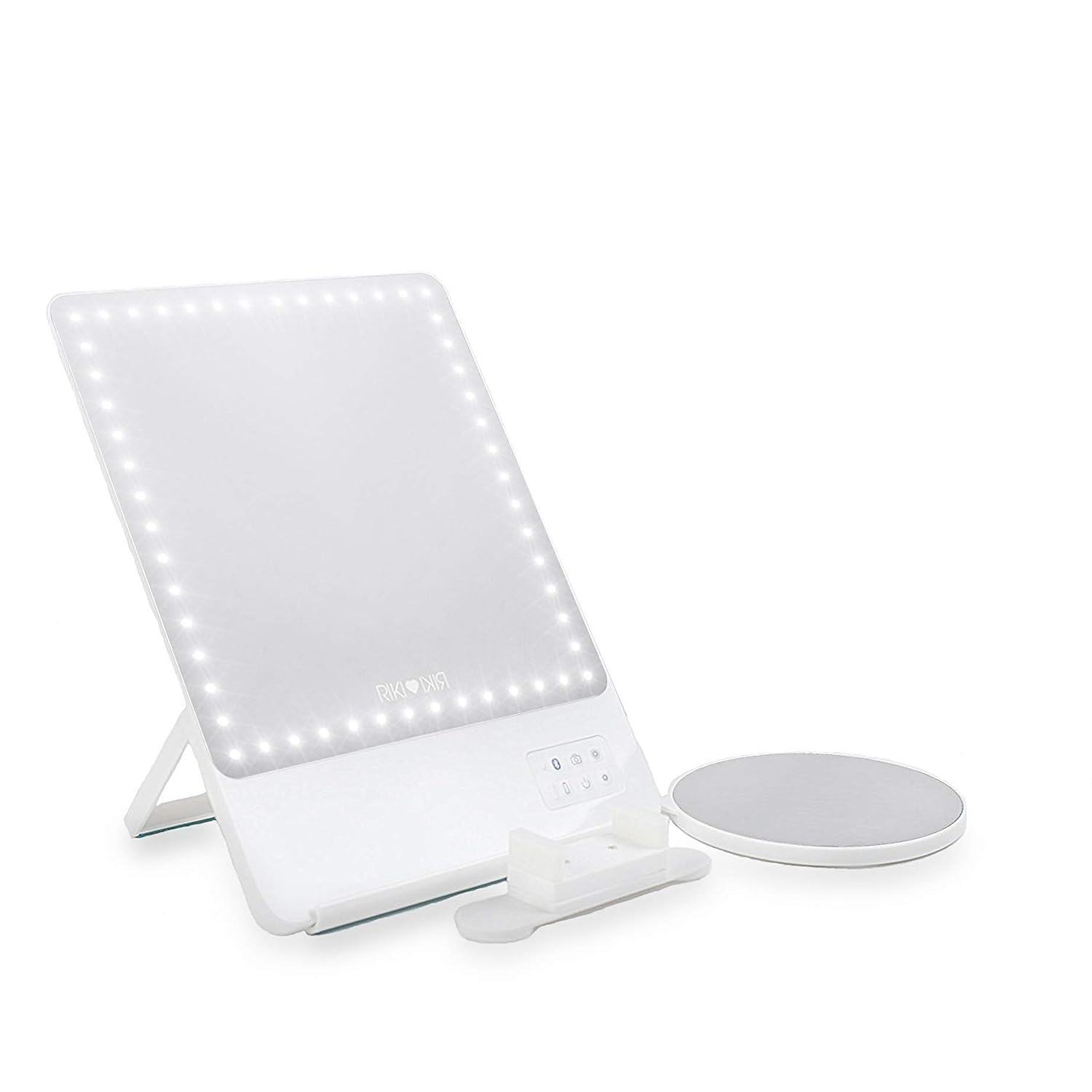 If you’re a member of the selfie generation, then you’ll appreciate that the Glamcor Riki Skinny (around $195) has a magnetic surface to which you can stick the included phone holder, so you can snap a photo to share on social media or with friends.

What Makes A Good Makeup Mirror?

Makeup mirrors are designed to highlight and zoom in on the subtle curves of the face, and the particular texture of makeup, in ways that standard mirrors simply cannot. The most thorough ones have adjustable side panels so a person can see the front of their face, and their profile from both sides, at the same time. This is the best way to actually know if they’re applying makeup evenly on their cheeks and temples.

Five times magnification is ideal for more detailed jobs like eyebrow plucking. Magnification can also help one examine their pores to make sure makeup isn’t clogging them too much or causing blackheads. Considering the tremendous amount of pores humans have, it’s a good idea to examine them regularly for any blockage.

Since you’ll need your hands to do your makeup, you need a mirror that not only has an adjustable angle but will stay in place so you don’t need to hold it. On the topic of angles, the more degrees a mirror can rotate, the better. If a person intends to put their makeup mirror on a surface, like a vanity table, they should look for one with a small base so it won’t take up much room. If you plan on mounting your mirror to a wall, consider one with an adjustable arm so you can manipulate its positioning.

The History Of Mirrors

There are countless stories from ancient mythology that involve someone catching their own reflection in a still pond, and believing it to be another person. The first man-made mirror, however, didn’t come to be until 2900 BCE, when the Ancient Egyptians carved them out of polished bronze and attached handles to them made from either ivory, wood or metal. There is also a cast bronze mirror that historians have dated back to 2000 BCE China.

The Greeks evolved from carving them out of simple bronze and began making them out of silver and gold, and adding gems.
These original mirrors were only large enough to reflect one’s face, but the Ancient Greeks are accredited with creating full-length mirrors sometime between 4 and 65 BCE. They would typically decorate their mirrors with images of the gods. The most commonly represented gods were Aphrodite, the goddess of beauty and love, and Eros, the god of desire. There was even a version of a compact cosmetic mirror at the time; it was housed in a boxed metal cover, and people would carry it around with them.

In Ancient Greece, mirrors were considered very valuable. The Greeks evolved from carving them out of simple bronze and began making them out of silver and gold, and adding gems. Some women paid a price for a mirror equal to a woman’s dowry at the time. Meanwhile, the Japanese considered mirrors to be sacred objects. Since mirrors arrived in Japan, they’ve been an important part of imperial rituals. They’re also used to ward off evil spirits, and to communicate with the gods.

Where Makeup Fits Into Feminism

The standard definition of feminism is the advocacy of women’s rights in all matters of life, from the social arena to the political and economic ones. For centuries, many women have felt that society stripped them of the right to go makeup-less. To this day, major publications dedicate entire pages to images of celebrities who are not wearing makeup, pushing the notion that this is revolutionary, or even inappropriate. Trends like these inspired a more recent trend; the no-makeup movement.

The standard definition of feminism is the advocacy of women’s rights in all matters of life, from the social arena to the political and economic ones.
Advocates of the movement say that it is liberating, and intended to show women they do not need conventional beauty products like makeup and bras. But a new wave of feminists argues that the movement is exclusive. Many say that the use of the words, “women don’t need makeup,” imply that the women who do wear makeup do so because they feel they need to when, in fact, they may just want to. One such group that states women should get to choose whether or not they wear makeup are the lipstick feminists.

There is a third group that doesn’t quite side with or against the no makeup movement. Many people believe that, while it is true women should get to choose whether or not to wear makeup, and shouldn’t be deemed as anti-feminist for doing so, they argue that perhaps the reason women want to wear makeup is inherently anti-feminist. Essentially they argue centuries of pressure to wear makeup have made women subconsciously believe they need it, and now they struggle to know if they actually want to wear it or are responding to societal pressure.